I saw this on the course announcments page. I didn't know what it was, so I followed the link and read about it. This feast commemorates the canonization of Saint Walpurga and the movement of her relics to Eichstätt, both of which occurred on 1 May 870

The festival above celebrates an end of witchcraft. Saint Walpurga was hailed by the Christians of Germany for battling "pest, rabies and whooping cough, as well as against witchcraft." I was curious what constitutes as witchcraft so I followed the link and read it up. This lead me to the etymology of the word "witch"

This painting is lovely. It was on every page regarding witches and witchcraft, so I became curious. Waterhouse made like five different versions of this painting. I would love to have a print of it

The Gate of Hell and Charon

Charon, the ferryman of the Acheron

carries souls of the newly deceased across the river Styx

A coin to pay Charon for passage, usually an obolus or danake, was sometimes placed in or on the mouth of a dead person

Some authors say that those who could not pay the fee, or those whose bodies were left unburied, had to wander the shores for one hundred years, until they were allowed to cross the river

The First Circle: Limbo - The Heathens

Virtuous pagan is a concept in Christian theology that addressed the problem of pagans who were never evangelized and consequently during their lifetime had no opportunity to recognize Christ, but nevertheless led virtuous lives, so that it seemed objectionable to consider them damned.

Prominent examples of virtuous pagans are Heraclitus, Parmenides, Socrates, Plato, Aristotle, Cicero, Trajan, and Virgil. Dante Alighieri, in his Divine Comedy, places a number of virtuous pagans in the first circle of Hell (analogous to Limbo), including Homer, Horace, Ovid, and Lucan.

Week 14 Microfictions: The Horror Within

The mother softly sings to her baby, her voice shaking in fear. She looks through the window out into the dark night, the glass reflecting the lights of the approaching villagers. Turning back to her sleeping baby, she hurriedly hides him under the floorboards, praying he stays asleep. As she gets the floorboard back into place, her door hits the wall with a bang! Angry neighbors spill into her house, demanding she hand over her monster. Two men grab her and throw her to the floor. She cries out, but her scream is drowned out by an even louder one.

The floorboards splinter open, birthing a creature so vile that God himself couldn't look upon it. The villagers try to run, but they didn't stand a chance.

Author's Note: I don't really know what this is, but I had fun writing it! I keep saying this, but I should have jumped on the Microfiction train ages ago. It's so fantastic. I had this idea after I thought about The Scarlet Letter for some reason. A mother loves her baby unconditionally (unless you're Chiron's mother), even if her precious angel is actually the Devil himself. I thought the image of the "vile creature" was super cute, and it made me laugh thinking about God being unable to look upon such cuteness. I took that line from the bible, where God shows his true face to... someone? I can't remember the full story, but he shows his face and it kills the man. Anyway, I like writing these!

Worshiped by fishermen and sailors

A fisherman’s wife gave birth to her sixth daughter. The daughter was born with her eyes open, and made no sound or cry until she was four years old. They named her Mo – “the silent one.” The God Guanyin was impressed by the girl’s silence, and blessed her with powers. Mo excelled at swimming, and discovered she could manifest her spirit in far-off places. She used this to guide ships to shore. One day, her father and brother became lost in a storm at sea. Mo manifested on the shore, and used her powers to guide them home.

Goddess of the Sea

The sea merged with freshwater, and created a marriage between Tiamat and Abzu. This marriage produced divine offspring, but Abzu feared their rebellion. Abzu confronted his children who admitted they were planning usurp his throne. A fight ensues, and Abzu is slayed. Enraged, Tiamat morphs into a massive sea dragon, bringing forth monsters and dragons unto the world. She wages war against her children, attacking them with her devilish creations. The storm-god, Marduk, confronts the goddess. The bloody battle raged across the cosmos, but ended with Marduk’s victory. Marduk divided Tiamat’s body to form the heavens and the earth.

Goddess of the river Boyne

Dagda, husband to the goddess Boann, forbid her from approaching Connla's Well. Temptation overcame her, and Boann found herself drawing near. Looking into its depths, the goddess saw a salmon swimming in circles. The power of the well was tangible, and the goddess felt she must challenge it. Thrice the goddess circled the well, and with each step the ground shook. Suddenly, the water within surged up in a violent vortex. The waters rushed down to the sea, creating the river Boyne. In the madness, Boann was swept away to the sea. Unable to fight the current, the goddess drowned.

Author's Note: I didn't initially plan to write about water goddesses, but the first two just happened to be water deities, so I found a third to keep the theme. I didn't know about these goddesses beforehand, but I thought they were so cool! I've been interested in reading about deities lately, so I wanted to keep with with my micro-fiction momentum and make some more.

John William Waterhouse - Magic Circle     Walpurgis Night I saw this on the course announcments page. I didn't know what it was, so I... 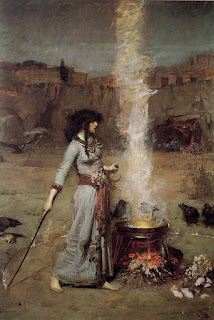